From Battlefield to Farm Field

"From Battlefield to Farm Field" was the theme of the 2012 Unmanned Aircraft Systems (UAS) Action Summit held in Grand Forks, North Dakota, May 22 & 23.  Sponsored by the Red River Valley Research Corridor, this was the 6th such conference that focuses on the development and use of unmanned aerial vehicles (UAVs).

Out of the 350 or so people there, I was probably the only one that needed to learn that we don't call these flying things drones, they are UAVs. I don't believe the term "UAV" is necessarily reflecting the military's love of acronyms but is rather distinguishing the less sophisticated unmanned aircraft that would fly a preset route, collect imagery, then land. Today's unmanned aircraft are extremely sophisticated craft that have a crew of "2 to 800" reflecting the pilot on the ground who can be 1000s of miles away, the sensor operator, data analysts processing the information being collected by the UAV, communication specialists who connect the UAV to ground-based and airborne assets, maintenance crews, and other support teams.  So the "S" in UAS describes a SYSTEM or SYSTEMS of multiple components working together, just like the "S" in GIS. 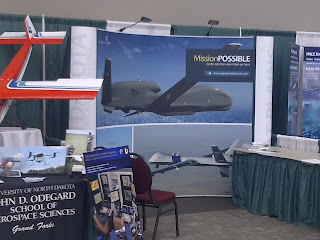 This was my first time being exposed to so much UAS information. It was at times a daunting task to fully understand what was being said.  There were more acronyms on some of the slides than real words. But I did manage to come away from the Summit with a number of concepts:
If you get a chance in the future to learn more about UAS and UAVs, it would be time well spent as I believe this is an industry in the early stages of growth.